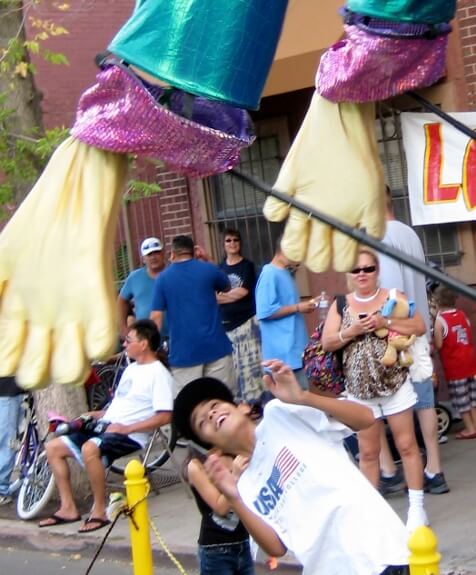 Giant Parade Puppet gets acquainted with a young fan!

Very nice turnout for the Fiesta and cookout. The street festival covered three or four city blocks and a couple of parking lots as well. Lots of enthusiastic families welcomed our bubbles, Giant Parade Puppet (thanks Brent!) and stilt walker ( Thanks Matt!) Brent’s wild Puppet Dancing was a hit! Of course the Bubble Tower was popular, it was fun watching the security guys batting the bubbles! After swearing them to “use good judgment” I gave them each a   GOOHF card, which made their day!

Crowds were thin at 4 pm as you would expect, by 5:30 the street was filling in nicely, and stayed that way until 9 pm closing. The bubbles after dark were amazing.

The food looked and smelled absolutely delicious. I was kept so busy attending the Bubble Tower and assembling a Giant Parade Puppet that all I managed was a very welcome ice cream cone and a cookie! Hope I have better luck next time!

One sight to behold, was a Daddy with his daughter riding on his shoulders, catching bubbles. While waiting for the bubbles to fall, she would get so excited and would start batting his head and pulling his hair!

The back up battery kept the bubbles going to the end.

For an event of this size, and in only its’ second year, it was very impressive, both in turnout and execution.
Word is next year’s Fiesta will be bigger and even better, held on the last Saturday in August.